Camellia, also known as “cha-hua” in Chinese, is the largest genus of flowering plants in the Theaceae family. It consists of nearly 200 known species and is widely dispersed throughout China. They are ubiquitous in China and southeastern and eastern Asia, where over 80% of these species are present (Vijayan et al., 2009). Their flowers are usually red, purple, pink, or white. Additionally, they have less yellow blossoms, making them the most sought-after variation of this plant’s flower. Camellia with deep yellow blossoms is also referred to as “golden camellia” and was discovered in Guangxi, China, in 1965 by Hu, who named it Theopsis chrysantha (Hu, 1965). The taxon was then renamed “Camellia” and subsequently “Camellia chrysantha” (Tuyuma, 1975).

It is believed that golden camellia has a variety of pharmacologically active compounds, including polysaccharides, saponins, polyphenols, and flavonoids, which are frequently used by the Chinese to make both tea and traditional medicines (Do et al., 2019). According to a recent study, golden camellia contains more phenolic compounds than other species of the same genus, such as green tea (Camellia sinensis) (Song et al., 2011). In golden camellia, polyphenolic compounds such as quercetin, kaempferol derivatives, and apigenin have been identified, but only in trace amounts in normal tea leaves (Lin et al., 2013; Wang et al., 2017). These factors enhanced the therapeutic value and pharmacological potential of golden camellias.

Camellia nitidissima C.W. Chi is a rare and well-known ornamental camellia species that is listed in the Compendium of Materia Medica, Ben Cao Gang Mu (本草纲目). It was used to treat nephritis, hepatitis, jaundice, urinary tract infections, dysentery, hypertension, diarrhea, liver cirrhosis, sores, and irregular menstruation (He et al., 2017). Flowers and leaves of C. nitidissima have been commercially cultivated as a new source of tea leaves. Its seeds have been used to produce essential oils, and both flowers and leaves are extensively utilized by Chinese communities (Wang et al., 2018). In addition to offering functional benefits to the community via non-pharmacological and lifestyle adaptations, it has been discovered to exert a wide range of pharmacological effects. It can be an useful agent with anticancer, antioxidant, hypolipidemic, antidiabetic, antiallergic, antibacterial, and anxiolytic properties (He et al., 2017; An et al., 2020). Previous research study has shown that C.nitidissima has neuroprotective benefits through a synergistic interaction between antioxidant and neurotrophic signaling pathways (An et al., 2020). Despite the growing number of research studies describing various pharmacological activities of C. nitidissima, there are no data on its chemical fingerprinting or the chemical composition of its leaves, flowers, and seeds. The plant’s chemical composition may vary depending on the species, location, age, harvesting system, and drying method. Different parts of a similar plant may contain significantly different components, especially the major ones (Heinrich, 2015).

Several approaches, such as the widely employed chromatography techniques in laboratory research, can be utilized to examine chemical compositions and provide a comprehensive overview of medicinal plants (Yang et al., 2013; Kitanov et al., 2015). However, chromatography necessitates a difficult sample preparation method, and it is time-consuming to obtain a complete analysis (Peerapattana et al., 2015). Based on the current market value, 1 kg of C. nitidissima flower will cost around 2,000–3,000 Chinese yuan (RMB), whereas C. nitidissima leaf costs only 200–400 RMB. Due to the considerably larger market price of C. nitidissima flower, it is feasible for unscrupulous vendors to adulterate or mix the flower with the leaves in their beverage or product. Chromatography may make it difficult to discern between leaves and flowers with similar phyto-compound profiles.

A total of 121 Camellia nitidissima samples were provided by Prof. Chen Jingying (Fujian Academy of Agricultural Sciences), including 34 flowers, 80 leaves, and 7 seed samples. All samples were collected from Guangxi and Fujian (Zhangping, Yongfu, and Shanghang provinces) between 2016 and 2017. In addition, 22 Camellia nitidissima adulterated samples from the market and 10 TCM reference flower samples from the National Institutes for Food and Drug Control, China, were included for OPLS-DA and PCA-class discrimination and classification studies, respectively. Potassium bromide (KBr) was purchased from Merck (Germany) and used as the background for FT-IR analysis (Merck, Germany).

Before the experiment, KBr was dried overnight at 120°C to remove all traces of moisture. Each sample was pulverized and mixed with crystalline KBr. Subsequently, the mixtures were ground and compressed into tablets. The spectra were recorded from 4000 to 400 cm−1 (mid-infrared region) at a resolution of 4 cm−1 with a 1 cm−1 interval. Each spectrum was calculated from 16 co-added scans to minimize the signal-to-noise ratio (SNR) and improve the spectral quality. The raw FT-IR spectrum was processed using Spectrum 10.5.3 (PerkinElmer, United States). The FT-IR spectrum was accepted when the achieved transmission was 60% or higher (the lowest peak located within 30–10% of transmission). Alternately, the test was repeated with KBr or sample addition until at least 60% transmission was achieved. The pellets were inserted into a sample holder equipped with a programmed heating jacket (FTIR Solution, Malaysia) to acquire the 2D correlation infrared spectrum. The sample holder was then heated, and the spectra were collected at different temperatures ranging from 20°C to 120°C at a 10°C interval.

After obtaining the FT-IR spectra, they were converted to a second-derivative spectrum with 13 data points for slope calculation. Moreover, the FT-IR spectrum also undergoes baseline correction and smoothing before performing arithmetic correction. The 2D-IR correlation spectra were calculated and obtained via treating the spectra with 2D-IR correlation analysis software developed by Tsinghua University (Beijing, China).

In the preliminary phase, unsupervised pattern recognition techniques known as principal component analysis (PCA) were utilized to examine variations in the FT-IR spectral characteristics of various parts of C. nitidissima, adulterated, and TCM reference flower samples. After PCA analysis, PCA-class and orthogonal partial least square discriminant analysis (OPLS-DA) were adapted for the discrimination study. The samples were randomly divided into calibration and validation sets. When conducting PCA-class and OPLS-DA model, 60% of the spectra from different parts were considered a calibration set, and the remaining spectra (40% of C. nitidissima, adulterated, and TCM reference flower samples) were considered a validation set. The specificity, accuracy, and sensitivity of PCA-class and OPLS-DA for differentiating the validation set were determined. For the OPLS-DA study, R2Y(presentation of the variation of the calibration set-Y, explained by the model), Q2Y (presentation of the variation of the calibration set-Y, predicted by the model according to cross-validation), root mean-squared error of estimation (RMSEE), root mean-squared error of cross-validation (RMSECV), and root mean-squared error of prediction (RMSEP) were calculated. The cross-validation method with seven cancellation groups was conducted to verify the robustness of the model. The permutation test was conducted as internal validation, with 100 permutations predetermined. In addition, three parameters, namely, sensitivity, specificity, and accuracy, were computed to evaluate the performance of the calibration model. All OPLS-DA, PCA, and PCA-class models were established using SIMCA 14.1 (Umetrics, Sweden).

Tri-step infrared spectroscopy is an analytical method explicitly applied for analyzing complex systems. It comprises conventional FT-IR, second-derivative infrared spectroscopy (SD-IR), and two-dimensional correlation infrared spectroscopy (2D-IR) (Liu et al., 2018). FT-IR spectroscopy was utilized to acquire the infrared spectrum corresponding to the chemical fingerprint of samples. It generates an infrared spectrum by detecting and quantifying the vibrational bond between functional groups, thereby disclosing the entire chemical characteristics of its analytes. Figure 1 shows the conventional FT-IR spectra of flowers, seeds, and leaves of C. nitidissima. It can be noticed that the spectra of flowers, seeds, and leaves of C. nitidissima have some variances in shape and intensity, particularly after 1800 cm−1. The assignments of the peaks and their possible compounds are presented in Table 1. 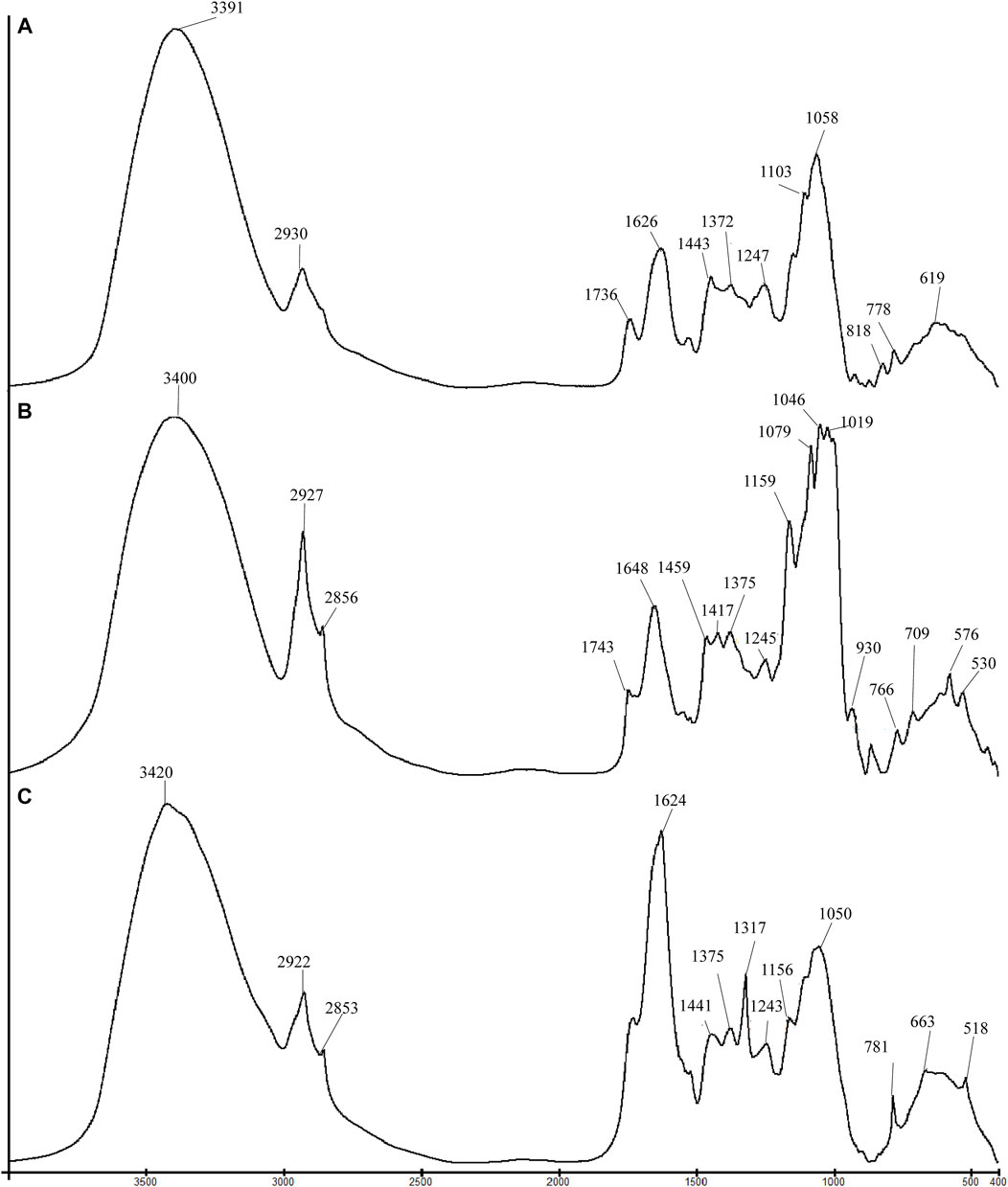 This study revealed that different portions of the same plant, C. nitidissima, contain distinct major constituents. The operational technique for identifying and differentiating the elements of a plant—the flowers, seeds, and leaves—produced a blueprint for future studies. This research demonstrated the dependability and rapidness of multi-step infrared and chemometric analysis to identify sample chemical components. Chemical fingerprinting, including peak shape, position, and intensities, gave unique markers for detecting chemical compositions, thus relating to the separation of C. nitidissima plant segments. This is crucial in the study of herbs because it allows for the rapid and thorough evaluation of samples and offers the data needed to be zero in the components of the herbs that have a specific pharmacological effect on the human body. Although this study established a clear differentiation between the chemical composition of C. nitidissima flowers, leaves, and seeds, additional research is needed to determine C. nitidissima’s whole chemical composition.