Chemical oxygen demand（COD） refers to the amount of oxidant consumed by oxidizing reducing organic substances in water samples under certain conditions. In water quality testing, the degree of water pollution by reducing substances is one of the important testing indicators. In nowadays, commonly used methods for detecting COD at domestic and foreign include potassium dichromate oxidation method, permanganate index method, ultrasonic digestion method, microwave digestion method, chemiluminescence method, an electrochemical method, etc., but these methods require sampling to be carried out in the laboratory. It has measurement, high level of operation requirements, high cost and serious environmental pollution, narrow measurement range, and other issues. Compared with the shortcomings of the above detection methods, ultraviolet spectroscopy has the advantages of quick and simple operation and no pollution to the environment to realize the real-time measurement of water quality in situ. therefore, it has become the most representative method in the spectroscopy method. When using UV spectroscopy to detect COD, most scholars only investigate COD standard water samples. For example, Yang Hong et al. used the COD in standard water samples prepared by potassium hydrogen phthalate to investigate, but it is often not of universal application value to investigate only the COD standard water samples. So how to use ultraviolet spectroscopy is one of the current research questions for scholars from various countries which more accurately explore the COD value in actual water samples on the basis of standard water samples.

The choice of wavelength is an important factor that affects the accuracy of UV spectroscopy to detect COD. Nowadays, many scholars are focus on a certain band to research. Xu Yigang and others used single-wavelength ultraviolet light with a wavelength of 254 nm to explore COD detection in water. In order to eliminate the influence of water turbidity on the absorption of ultraviolet light, Yang Yunkai et al. detected COD at a wavelength of 546 nm.

Using standard water samples for exploration, performing regression analysis on the absorbance of different concentrations of standard water samples, and determine the best detection wavelength for COD through fitting results. Then, according to the principle of least squares, the temperature compensation model was established at the optimal detection wavelength, and the actual water sample was used as the research object to verify the applicability of the optimal wavelength and the accuracy of the temperature compensation model.

After we know how to use ultraviolet spectroscopy to detect the effects of wavelength and low temperature in COD, which instruments should we use? 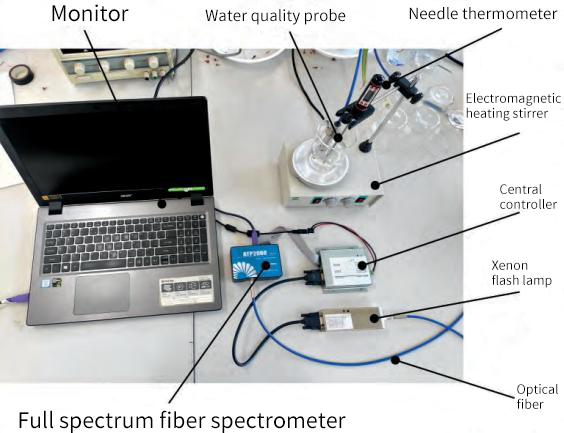 Spectral scanning software is the system's own software. The system emits the light source of the xenon scintillation lamp through the optical fiber to the reflector of the adjustable optical fiber sensing probe. The full-spectrum spectrometer collects the light reflected by the reflector, obtains the OD absorbance data, and transmits it to the display platform. So as to obtain the solution spectrum of the whole band, and then analyze the experimental results.

What is the full-spectrum spectrometer?

For example, ATP3034 is an ultra-high resolution micro spectrometer which is one kind of the full-spectrum spectrometer, developed by Optosky. The highest resolution can reach 0.05nm, which is suitable for all kinds of high-resolution applications. At the same time, it has the characteristics of high reliability, ultra-high-speed, low cost, high cost performance, and so on. It can be used in various environmental applications such as online testing.

ATP3034 is perfect for fast detection attribute to its high A/D converter frequency and high-speed data transmission. In the ATP3034 memory chip, some algorithms to improve the performance are programed solidly, such as wavelength calibration coefficients, linearity coefficients. ATP3030 operates with a single +5V DC supply supplied from USB or UART. 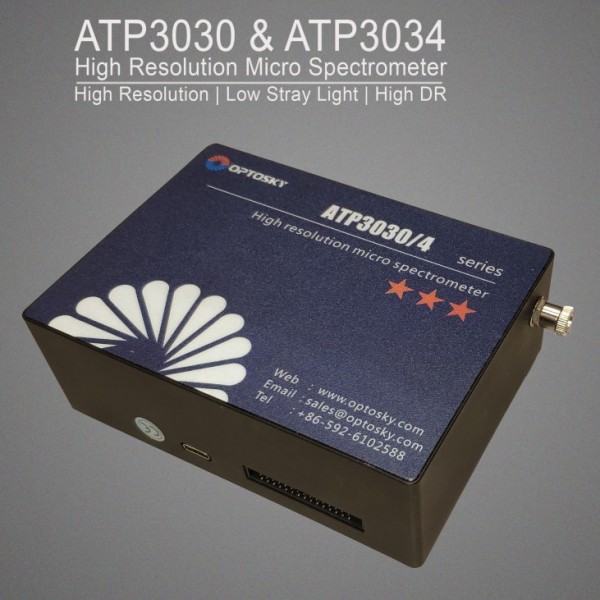 Why we use Optosky’s full-spectrum spectrometer? Because it has the following character and wide application.

Generally, COD represents the degree of water pollution by reducing substances，compared with the traditional method to detect COD，the detection time is long and the operation is complicated. Ultraviolet spectroscopy has become a mainstream detection method due to its fast detection sped and no need for chemical reagents. Based on the Lambert Ber law，using potassium hydrogen phthalate powder to prepare standard solution as an experimental object，aiming at the detection accuracy of COD ultraviolet spectrum at low temperature，the optimal detection wavelength of COD and the influence of temperature on the detection value of COD were studied respectively. At the same time，the surface water in a certain area of Changchun City is selected as the research object to verify the applicability of the best COD detection wavelength in the actual water sample and the accuracy of the temperature compensation model. When studying the influence of detection wavelength on COD detection value， chooses A256 ，A266 ，A276 ，A286 ，A296 five wavelengths to regression analysis samples，including A256 ，A266 ，A276 ，A286 ，A296is A wavelength of 256，266，276，286and 296nm absorbance，the absorbance of A linear regression with the COD standard solution，can be sen from the fitting data 276，286and 296nm model representative，286nm in fitting out the best efect，296nm，Finaly，it is 276nm，of which the correlation coefficient r of 286nm is 0.994 6and the determination coefficient R2 is 0.989 4，SSE= 0.011 4and RMSE=0.037 7at 296nm，but the determinant coefficient R2 is low. It can be seen that 286nm is the highest correlation and the smallest error. The results show that 286nm is also suitable for the detection of actual water samples，and 286 nm is the best detection wavelength. When studying the influence of temperature on COD detection value，UV absorption spectra of COD water samples and standard water samples were collected at different temperatures. The results show that the UV absorption of COD solution increases with the increase of temperature. After thoroughly studying the spectral absorption of the actual and standard water samples with the same concentration of COD at the standard temperature (20 °C ), in order to eliminate the influence of temperature on COD measurement，a temperature compensation model, was established by the least square method. The accuracy of the temperature compensation model is verified by the actual water sample，and the error analysis is carried out at the same time. The results show that the maximum relative error between the actual value of COD and the compensated value is 6.38% ，the minimum relative error is 0.63% ，and most of the relative errors are concentrated in 4% ， which shows that the fitting effect of the model is good.Thus， the COD temperature compensation model has high compensation accuracy and good effect.Finaly，the conclusion is drawn that the best wavelength and temperature compensation model selected for COD detection can effectively improve the accuracy of COD low-temperature detection.