Pine xylophilus dubbed 'cancer' of pine trees！
l Extremely destructive;
l Once the pine tree is infected, it will die in about 40 days;
l There is no effective drug to treat it, which is called "cancer" of pine trees;
l If effective measures are not taken, the entire pine forest will die within 3-5 years
l Since the discovery of pine xylophilus in 1982, it has spread rapidly, including Jiangsu,
14 provinces (cities, districts) in Anhui, Shandong, Zhejiang, Guangdong and other parts of the country issued
over 80,000 hectares, resulting in the death of a large number of pine trees. 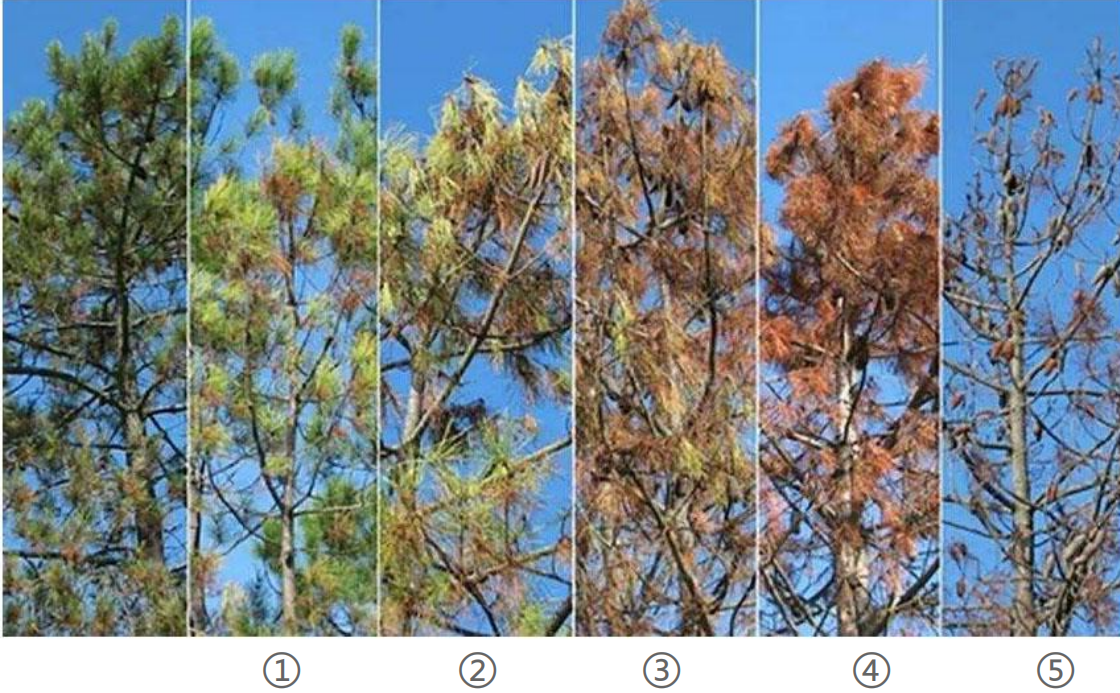 ① The appearance is normal, the secretion of resin decreases or stops, and the transpiration decreases;
②The needles begin to change color, resin secretion stops, and traces of beetle infestation and egg laying by longhorns or other beetles can usually be observed;
③ Most of the needles turn yellowish-brown and wilted, and beetle crumbs are usually seen;
④ All the needles turn yellowish brown, and the diseased tree withers and dies, but the needles do not fall off. At this time, there are generally many kinds of pests living on the tree.

Based on this knowledge, the spectral feature information of the changes in each band of the spectral region of vegetation eroded by diseases and insect pests is obtained, especially the change information of the spectral features in the near-infrared band is extracted, and then leaf pigment, cell structure, and water content can be obtained. Quantitatively analyze the damage of pests and diseases.
Thus, it is possible to monitor the classification status of masson pine pests and diseases in a wide range and large scale.

Why UAV hyperspectral can monitor pine nematode disease?
• Hyperspectral characterizes high-resolution optical information, which utilizes many narrow bands of electromagnetic waves (typically <10nm) to obtain data about objects of interest.
•Hyperspectral images are acquired by imaging spectrometers, which provide tens to hundreds of narrow-band spectral information for each pixel and generate a complete and continuous spectral curve.
•The image information can reflect the external quality characteristics of the sample such as size, shape, defect, etc. Since different components have different spectral absorption, the image will reflect a defect more significantly at a specific wavelength, and the spectral information can fully reflect Differences in the physical structure and chemical composition of the sample.
•Using hyperspectral characteristics can identify pine monitoring in different disease stages. And combined with unmanned aerial vehicles, it can realize the effective monitoring of large-scale forests.