The test of Zhumo time sequence has always been one of the difficulties in forensic identification. Extending the Raman spectrum array surface scanning imaging technology to the study of Zhumo time series can realize non-destructive inspection of inspection materials. In the test of the vermilion ink time series, there are many factors that will affect the test results. In this paper, by testing the vermilion ink time series samples formed by different types of writing pens and the same ink pad or ink, the Raman spectrum array surface scanning imaging is studied by the types of writing pen inks. The technique examines the impact of vermilion and ink timing.
In the experiment, four categories of 188 writing pen inks (inks) were scanned by Raman spectrum. According to the differences and similarities of their Raman characteristic peaks, they were further classified. Black ballpoint pens were divided into 6 categories, blue ballpoint pens into 3 categories, black signature pens into 4 categories, and blue signature pens into 10 categories.  The Raman spectra obtained after scanning the printing mud, printing oil and paper are shown in Figure 1 to Figure 3. 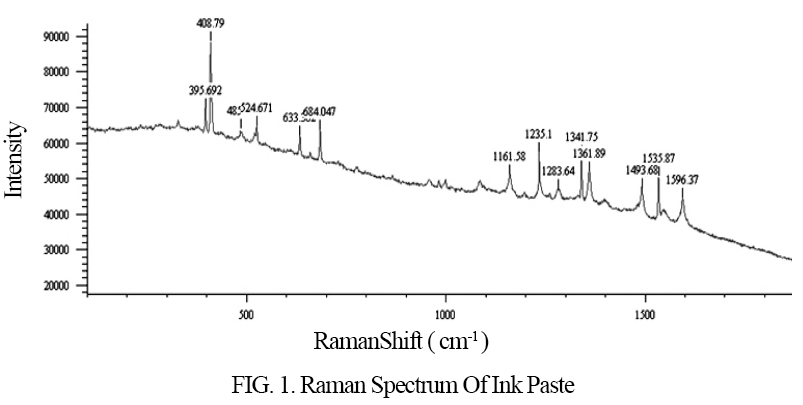 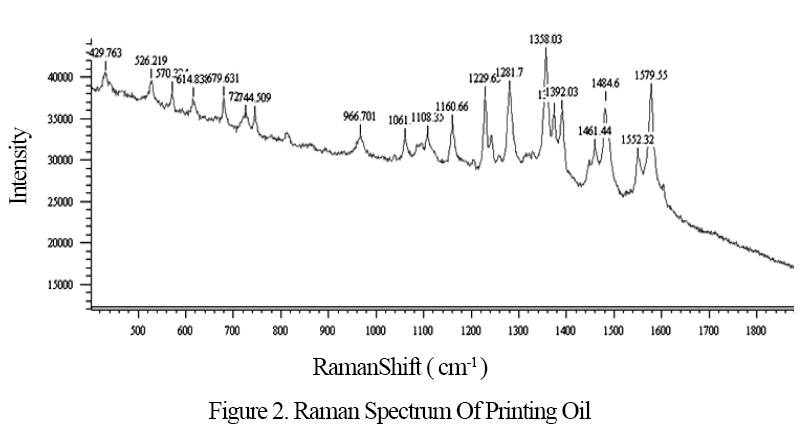 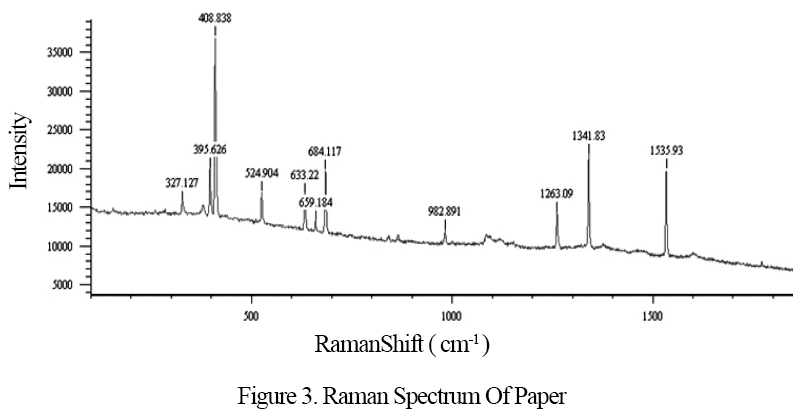 At present, Raman spectral array plane scanning requires that all the tested substances can get better spectra under the same excitation light excitation, and the characteristic Raman peaks are different, so a better distribution of substances can be obtained after image fitting.The Raman spectrometer used in the experiment is equipped with two excitation light sources with wavelength of 532 nm and 785 nm.The fluorescence of black ballpoint pen, blue ballpoint pen and blue signature pen ink is weak under excitation light of 532 nm, so the Raman spectrum can be easily obtained.Most of the Raman signals under excitation light of 785 nm are weak,but the fluorescence back-bottom is strong.The paper has no obvious Raman characteristic peak at 532 nm, but better Raman spectrum can be obtained at 785 nm.At 785 nm wavelength, the fluorescence of black signature pen and printing paste is weak, and the Raman spectrum can be easily obtained.At 532 nm wavelength, the Raman characteristic peaks of printing paste are annihilated by fluorescence.Therefore,the 785 nm excitation light with Raman characteristic peaks in writing pen, paper, printing paste and printing oil was selected as the surface scanning light source for the study.
Raman signal intensity is related to laser output power. The Raman spectrometer used in the experiment has 16 laser decay levels ranging from 0.000005% to 100%. The higher the laser output power, the stronger the Raman signal. The laser power required in a single point scan is low, because the laser stops to excite Raman signals on the sample for a period of time, and too much laser power damages the sample. During the experiment, according to the characteristics of different substances, the appropriate laser output power is selected on the premise of not making the sample volatile or burned. The laser attenuation level selected in the experiment is 0.05% to 1%. In the experiment, the laser attenuation level of black marker pen and oil sample was selected as 1% (as shown in FIG. 4), the laser attenuation level of blue marker pen was selected as 0.5% (as shown in FIG.5), and the laser attenuation level of black ballpoint pen was selected as 0.1% (as shown in FIG. 6). For the blue ballpoint pen, the laser attenuation level is 0.05% for the experiment (as shown in Figure 7). This is because the carbon or dye contained in the black signature pen and ink mud printing oil ink has better thermal stability, in order to get a better Raman spectrum without burning the sample.
The experiment was carried out by selecting the grade of higher attenuation power. However, the dye contained in the blue ballpoint pen ink has poor thermal stability and is prone tovolatilization when the laser power is high, so the grade with lower attenuation power is selected for the experiment.Large laser power needs to be set in array plane scanning, because in the process of array plane scanning, the automatic platform is in a state of continuous motion, and the
final Raman spectrum of each point is the integral of the Raman signal of each point. Need to set in array face scanning laser power, this is because in the process of plane array scanning, automatic platform is in a state of continuous movement, finally at various points in the Raman spectra is each point of the Raman signal of integral value, all point to get a better Raman spectra will need to have enough of the Raman signal, and the scanning time and cumulative frequency will make the whole scan time exponentially increased. Therefore, in order to obtain a better Raman spectrum under the condition of shortening the sweep.For tracing time, laser attenuation levels of 0.05% to 1% were selected for single point scanning and 10% for array plane scanning.Experiments show that the Raman spectra array face scanning technology to black ball-point pen, blue ballpoint pen and black pen, blue pen with inkpad or user shall respectively chapters before and after the formation of the first word after the word test samples, the Raman spectrum array scanning imaging technology processing, the cinnabar stick pseudo color image
sequence, can judge the writing stroke order with seals. See Figures 8 to 15. In the study, the most basic classification method is adopted for the test results of each
zhu-ink time sequence sample, and the test results are divided into two categories: detectable and undetectable. Can be detected refers to: in the first word after the chapter sample shows the phenomenon of covering the seal on the text strokes, and the edge of the text strokes appears curved Continuous and other characteristics; The samples of the first chapter followed by the word showed that the ink of the writing pen covered the seal, and the edges of the strokes were neat. See Figure 16.
It can be seen from Figure 8 to Figure 15 that different types of writing pens are different with the printing mud or printing oil formation of the zhu ink sequence samples have been good Inspection.The detection effect of experimental samples shall be based on the classification standard mentioned above.The results are shown in Table 1. Through the observation of the inspection effect and analysis of the detection rate, it is found that the ink paste or oil in this experiment has basically no influence on the Raman spectral plane scanning inspection results of the Ink sequence, and all the samples of the ink sequence have
obtained good inspection results. The first character and the second chapter samples all showed the phenomenon of overlaying the seal on the strokes and the edges of the strokes were curved and discontinuous. However, the samples of the first chapter and the second character showed that the ink of the writing pen completely covered the seal, and the edges of the characters were neat.

Conclusion:
Research showed that the Raman spectra of cinnabar stick sampling array face scan sequence spectrum atlas, through image matching and processing, get a different kind of dry ink and stamp pad ink filters in the paper on the distribution of pseudo color chart, according to the cinnabar stick temporal samples of first chapters before and after words microscopic characteristics, can judge the cinnabar stick sequence.  Under the experimental conditions, the ink type of writing pen has no effect on the test results.  Due to the fact that the different combinations of zhu and ink materials and the distribution characteristics of ink stains at cross parts are complicated, the relevant research needs to be further carried out.