How to Measure WO3/PVA Films by Spectroscopy

How to Measure WO3/PVA Films by Spectroscopy

Introduction
The broadband and strong optical limiting (OL) effects of Tungsten Trioxide-Poly (Vinyl Alcohol) (WO3/PVA) solid-state nanocomposite films are investigated by using the open-aperture (OA) Z-scan technique with 4ns laser pulses at three laser wavelengths of 355nm, 532nm, and 1064nm, which are located in UV, VIS and IR wavelength region, respectively. Compared with laser wavelengths of 532nm and 1064nm, the nanocomposite film exhibits much stronger OL effect at 355nm. The nonlinear absorption coefficients (β) at 355nm wavelength are 10.32 cm/GW and 15.44 cm/GW for the WO3/PVA solid-state films with 0.6 wt% and 1 wt% concentration, respectively, which is several times higher than the β values of WO3 nanoparticles or nanorods suspensions reported in other papers. Under the same laser energy and wavelength, the β value increases with the increase of WO3 concentration. At 532nm wavelength, the sample with 1 wt% concentration has a β value of 5.94 cm/GW, which is obviously larger than those of other reported typical nanocomposite materials, such as graphene oxide nanosheets, multiwalled Carbon nanotubes, CdTe quantum dots, and BDN dye doped matrix. The nonlinear optical (NLO) behaviors of WO3/PVA nanocomposite films are mainly attributable to free carrier absorption (FCA) for 355 and 532nm wavelength and two-photon absorption (TPA) for 1064nm. Based on these studies, the WO3/PVA nanocomposite film has potential applications in broadband optical limiters.
Experimental details
PVA has unique chemical and physical properties, such as highly water-soluble, biological friendly, good chemical stability, high transmittance, and easy to make thin films. In this paper, PVA based WO3 nanocomposite films were prepared as well as NLO and OL properties of such nanocomposite films were investigated in the nanosecond regime by OA Z-scan measurement under different wavelengths (355, 532, and 1064nm). WO3 nanoparticles (particle size <100nm, average size is 50nm) and PVA powers. First, 2 g of PVA powder was dissolved in 40 ml of distilled water kept to 60 ◦C with constant stirring for 1 h until the polymer was completely dissolved and formed a clear viscous solution. The obtained viscous PVA solution was divided equally into two parts. Different amounts of WO3 nanoparticles were added into the two parts, and then sufficiently stirred, two homogenously mixed suspensions with concentrations of 0.6 wt% and 1 wt% were obtained. The obtained suspensions were then cast on a clean glass plate and allowed to dry in air at room temperature for 48 h to form WO3/PVA solid-state nanocomposite films. The thickness of these films was measured using a conventional micrometer, which has a measurement accuracy of 1μm. The measurement results show that the thickness of nanocomposite films with different concentrations of WO3 are also about 70μm.
The Z-scan method is the most common method to measure the nonlinear refractive index and the nonlinear absorption coefficient for a wide variety of materials. The OA Z-scan technique was used to investigate the nonlinear optical properties of samples, the experimental setup is shown in Fig. 1.

Fig. 1. Open-aperture Z-scan Experimental setup. BS: beam splitter, L1: concave lens, L2 and L3: focusing lens, S: WO3/PVA sample, D1 and D2: detector.
Nd-YAG pulsed laser with a 10 Hz pulse repetition rate, 4ns pulse width, and wavelengths of 355, 532, and 1064nm. The laser beam was divided into two beams by a beam splitter, one was used as a reference and the other was expanded by a beam expanding system composed of a concave lens L1 and a convex lens L2, and then the expanded beam was focused on the sample by a convex lens L3 with a 10 cm focal length. The sample was placed on a motorized translation stage, which was interfaced with a computer through a motion controller. The detectors D1 and D2 were used to collect and measure the reference beam and the beam transmitted through the film, respectively.
Test Results
1. The linear optical absorption spectra of WO3/PVA nanocomposite films
ATP2000P used to measure the linear optical properties of WO3/PVA films, the absorption spectra of pure PVA and WO3/PVA nanocomposite films are shown in Fig. 2. 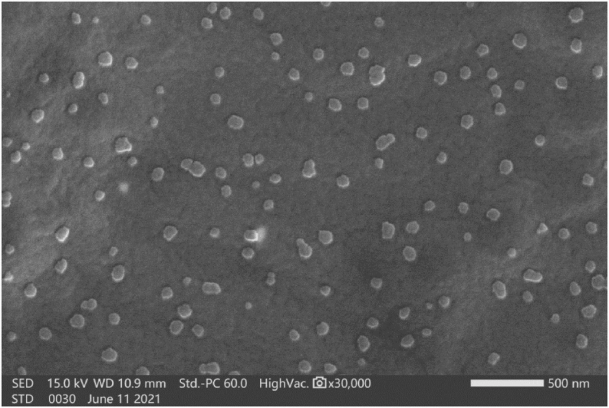 Fig. 3. SEM image of WO3/PVA nanocomposite film with a concentration of 1wt%.
3. The broadband NLO properties of WO3/PVA nanocomposite films
The OA Z-scan method under the nanosecond laser pulses with three wavelengths, i.e., 355nm, 533nm, and 1064nm, respectively, was carried out to investigate the NLO properties of pure PVA and WO3/PVA films. The experimental results are shown in Fig. 4.
Fig. 4. OA Z-scan curves of pure PVA and the WO3/PVA nanocomposite films under different laser wavelengths and energies (a) and (b): 355nm 80μJ, (c) and (d): 532nm 125μJ, (e) and (f): 1064nm 155μJ. Solid points are the experimental data and solid lines represent the theoretically fitting curves. Fig. 4. OA Z-scan curves of pure PVA and the WO3/PVA nanocomposite films
From Fig. 4, it can be seen that the nonlinear effect at the excitation wavelength of 355nm is the strongest for the samples with two concentrations as the valley of the transmittance curve is much deeper even in lower energy, and the calculated β value will be bigger. For 532nm and 1064nm, in the case of similar incident energy, the NLO effect of 532nm is stronger than 1064nm, and the β value of 532nm is larger than that of 1064nm at two concentrations.
For purpose of investigating the capability of nanocomposite films as optical limiters, OL measurements were carried out. The experimental setup for OL measurement is similar to the OA Z-scan except that the nanocomposite films were only placed in focus point and incident pulse intensity was changed. As shown in Fig. 5, the transmittance decreases quickly with the increase of the incident pulse intensity in the low intensity region, and the transmittance decreases more and more slowly in the high intensity region.