How to Detect Dielectric Barrier Discharge Ion Source by Spectroscopy

How to Detect Dielectric Barrier Discharge Ion Source by Spectroscopy

Introduction
Plasma is composed of ions, electrons and unionized neutral particles. The overall state of matter is neutral. The dielectric barrier discharge ion source uses helium as the excitation gas to produce ionized He+, excited He*, and metastable helium. Atomic Hem, high-energy electrons, and unionized helium atoms. These particles all have a certain energy. For example, the ionized state He+ has an ionization energy of 24.6 eV, and the metastable state Hem has an ionization energy of 19.8 eV (23S1) or 20.55 eV (2S1S0). The typical density of high-energy electrons is 1010-1012cm-3, They can produce a large number of free radicals, electrons, ions and excited atoms in the process of collision with the surrounding gas molecules. Therefore, in addition to the metastable helium atoms, Hem and the compound molecules in the air (such as water molecules) undergo Penning ionization to produce In addition to hydrate ions and electrons, other particle components will also participate in the characteristic ion process of the sample. Therefore, it is very important to understand the substance composition in the plasma to study the mechanism of DBDI ionization samples.
Challenge
Because the atomic structure of different substances, the energy of the excited state and the upper and lower energy levels of the spectral transition are different, the type of particles and the energy state can be determined according to the plasma emission spectroscopy, and the plasma composition can be qualitatively determined. Analysis, this experiment uses the spectroscopy system to study the emission spectra of helium and argon plasmas, combined with the mass spectra of the actual samples, and elaborates the composition of their plasma and the reaction mechanism between particles, and combines the plasma The components in the sample feature ion mechanism are discussed.
Experiment System
1. Reagents and materials: Methanol, Acetonitrile, distilled water, microelectrode glass capillaries (glass capillaries, B10024F, od=1mm,id=0.59mm, L=100mm), helium and argon.
2. Instruments and devices
DBDI-100 ion source, DART-SVP, the mass spectrometer is Thermo Finnigan LTQ ion trap mass spectrometer, the optical fiber spectrometer is Optosky ATP2000P (customized, measuring range 200nm-1100nm), and the low-temperature plasma experimental power supply CTP-2000K.
When measuring plasma spectra, ATP2000P and DBDI-100 ion source are placed at 90° vertically, as shown in Figure 1(a) below. The distance between the fiber spectrometer and the ion source nozzle is 1cm horizontally, and the vertical distance from the plasma is 1cm, and the helium discharge is measured. For plasma spectroscopy, the helium flow rate is set to 4L/min, the heating temperature is 100°C, and the ATP2000P integration time is set to 150ms. When measuring the plasma spectrum generated by argon discharge, CTP-2000K is used to power the ion source, as shown in Figure 1(b), the output voltage of CTP-2000K is set to 11KV, the flow rate of argon is set to 4L/min, and the heating temperature is 100 ℃, ATP2000P integration time is set to 2000ms. When measuring actual samples, the helium flow rate of the DBDI-100 ion source is also set to 4L/min, and the heating temperature is 100°C. The ion source is placed horizontally and sprays the plasma beam toward the inlet of the mass spectrometer. The outlet of the ion source is 2cm away from the inlet of the mass spectrometer. , Use capillary siphon injection to make the distance between the sample end of the capillary and the injection port of the mass spectrometer 0.5cm, as shown in Figure 1(c) below.

It can be seen from the table that the 391nm, 427nm, 470nm, 337nm, 357nm, and 380nm spectra generated by the nitrogen gas returned to the ground state after being excited belong to the blue-violet range, which is consistent with the observation that the plasma turns into a blue-violet phenomenon.
2. He-DBDI verifies the proton affinity of different samples
The mass spectra of water, water-methanol (v/v=1:1) mixed solution, methanol-acetonitrile (v/v=1:1) mixed solution and acetonitrile collected by mass spectrometry are shown in Figure 3. 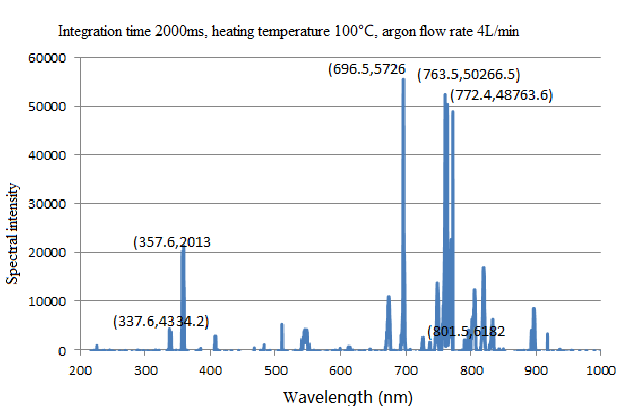 ; The second positive band line of N2 (337nm, 357nm and 380nm) is observed in the emission spectrum of Ar, which is mainly emitted by the transition of

.
4. Comparison of mass spectra of Ar-DBDI and DART ionized samples